Opposite Little Theatre/Viceroy Court side

Reported via desktop in the Invasive weeds category by Cllr Liz Jones at 13:46, Thu 15 April 2021

Sent to Central Bedfordshire Council less than a minute later 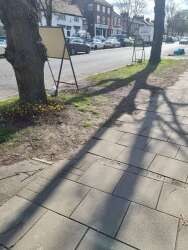 In between two large trees an area of weed, over grown, moss and rubbish. Requires a good tidy up